So when I filled out a survey about my Nina Garcia Quarterly box, the folks at Quarterly gave me a $10 coupon so I decided to put it toward trying out another of their offerings. (Don’t worry I still have my Nina Garcia subscription which they can pry out of my cold, dead hands).

There are tons of curators at Quarterly – some I recognize and some I don’t, along with different price points for boxes. I decided to try to pick something totally different than anything in my current box lineup, but I still wanted a celebrity I was familiar with. I settled on the Andrew Zimmern Box that costs $50.00 per quarter. Andrew Zimmern is listed as “Television,Food, and Travel Guy”. He hosts that “weird foods” travel show where he goes around the world eating stuff like turtle penis. He states on his quarterly page, “I love food. What I love even more is food with a story.”
Oh exciting, food that will tell me stories which hopefully won’t just be stuff like (that was a lot of calories go get your ass to the gym). My guess is this box should include food items from around the world with some travel items thrown in. I love cooking and trying new cuisines. I just hope there won’t be too much dried penis or goat’s blood or scary crap. I’m actually really open to most foods and have no food allergies, but there are some things that are never going in my mouth and most of them are what Andrew Zimmern regularly eats on his TV show.  This is only the second Andrew Zimmern box and the first had a Spain/Paella theme which I would have loved so I’m hoping this one is great as well.

Enough chatter and let’s get to it! 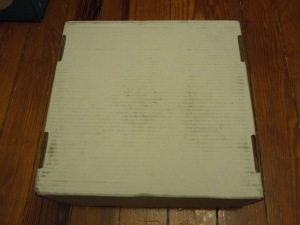 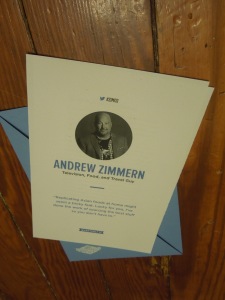 As usual with the Quarterly boxes we get a lovely letter explaining the choices. Andrew writes, “Replicating Asian foods at home might seem a tricky feat. Lucky for you, I’ve done the work of sourcing the best stuff so you don’t have to.” So Asian is our theme. My small refrigerator is 75% Asian condiments right now so I’m guessing I’m going to like most of what’s in here. 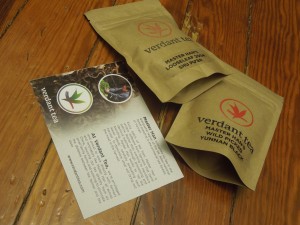 Verdant Tea: Master Han’s Looseleaf 2004 Shu Pu’er & Master Han’s Wild Picked Yunnan Black
(Estimated Retail: these teas are currently sold out, but prices seem to range from $6.50 to $15.75)
Description: “Master Han wild-picks his tea in the Qianjiazhai region of the Mt. Ailao national forest preserve in the primeval tea forest of Yunnan.”
Verdict: Like
There are primeval tea forests? See, that right there just made me want to drink this tea. It sounds like the real world equivalent of drinking unicorn tears from Narnia. I’ve been slowly trying to get into tea so this will be something fun to try that I would never in a million years have picked for myself.

Rain and Other South Sea Stories by W. Somerset Maugham:
(Estimated Retail: $4.46)
Description: “W. Somerset Maugham led many lives, including that of a doctor in London’s slums, a successful playwright and novelist, an agent for British Intelligence during World War I, and a world traveler. In 1917, he took the first of many voyages to the Pacific Islands and the Far East, where his keen sense of observation found inspiration for some of his finest writing.
Rain and Other South Sea Stories features one of Maugham’s most famous tales, concerning the clash between a missionary and a prostitute.”
Verdict: Hit
My reading choices tend to steer toward the trashy (to distract me from my awful commute) interspersed with notable literary works I never got around to reading so that I can remember how to actually string proper sentences together. I don’t read many short stories so I probably wouldn’t have picked this up on my own, but I will read it. I really love the idea of this box including books and stories about exotic locales. It makes it stand apart from other food boxes. 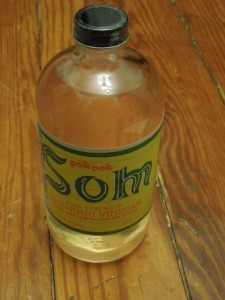 Thai Basil Pok Pok Som
(Estimated Retail: $15.00)
Verdict: On the Fence
Description: Drinking Vinegar in Thai Basil flavor
So we knew there had to be at least one weird thing in here and it looks like the Drinking vinegar is it. Apparently you can use this with soda water or in cocktails? To be honest I find the idea of drinking vinegar repulsive, but I’m thinking of trying to use this in cocktails to replace bitters (after all doesn’t booze make everything taste better?) We’ll see how my experiments fare, but until then I’m on the fence about this one. 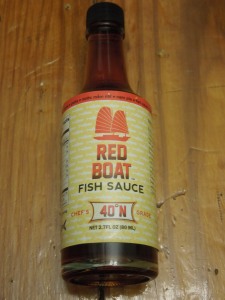 Red Boat Fish Sauce(2.7 oz):
(Estimated Retail: $6.95)
Description: “Red Boat premium fish sauce…is made using traditional chemical-free fermentation methods, a unique two hundred year-old artisanal process using only the freshest cá cơm (black anchovy), salted minutes after leaving the sea then aged for over a year in traditional wooden barrels. Red Boat anchovies are sourced exclusively from the crystal clear waters off the Phu Quoc island archipelago. Red Boat is pure, 100% all natural first press “extra virgin” Vietnamese fish sauce. Made from only two ingredients it is free from added water, MSG, and preservatives.”
Verdict: Hit!
Despite living in a metropolitan area finding fish sauce was an annoying task. For some reason the grocery store would keep eleventy million other Asian sauces, but not fish sauce. I’d have to make a special trip just to get any old fish sauce, nevermind this fancy pants version. I love to try cooking Asian dishes so this will give me an excuse to give homemade Pad Thai another shot.

Blue Grass Soy Sauce (100 mL)
(Retail: $5.50)
Verdict: Love!
Description: “Our soy sauce is microbrewed in small batches using only whole Kentucky grown Non-GMO soybeans, soft red winter wheat, and the purest limestone filtered Kentucky spring water. We ferment and age the soy bean mash in re-purposed bourbon barrels. It’s smoky and brothy with hints of oak and a mild sweetness reminiscent of fine Kentucky bourbon.”
I use soy sauce all the time and I’ve never tried one that’s “microbrewed in small batches”. I’m going to need to find a super special recipe for this. I’m thinking some kind of steak dish. It also came with a recipe for “The Sauce” which I guess isn’t referring to “hitting the sauce” but just a generic sauce you can use on any grilled meat. 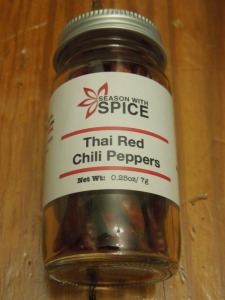 Season with Spice Thai Red Chili Peppers (.25 oz/7 grams)
(Retail: $4.49)
Verdict: Hit
Description: “A simple to use, must-have spice for cooking Asian dishes – notably Sichuan & Southeast Asian – our whole, dried Thai Red Chili Peppers give a spicy kick to stir-fries, noodles dishes, and soups.”
I have this great Chinese Takeout Cookbook that calls for dried chili peppers in a lot of the dishes so I’m sure I’ll put these to good use.

Overall:
Hit!
Most of the ingredients included in this are familiar to me but are unique brands I wouldn’t have known to try or seek out. With the exception of the drinking vinegar (which may be awesome, or a disaster, or an awesome disaster), I know I will use all of them. It’s also fun to get a new book that I wouldn’t have picked up on my own but that I can probably learn a little something from. The cost of this box was $50.00 but with my coupon, I only paid $40. Without knowing the cost of the tea I can’t give a full estimate on this box, but I think it’s probably just about at the $50.00 price tag without including shipping costs on each of the ingredients.
I think this box is great for inspiring new recipes and I’m most likely going to keep it for at least one more quarter.

What did you think of the items? Do you cook Asian dishes frequently? Have you ever heard of drinking vinegar?