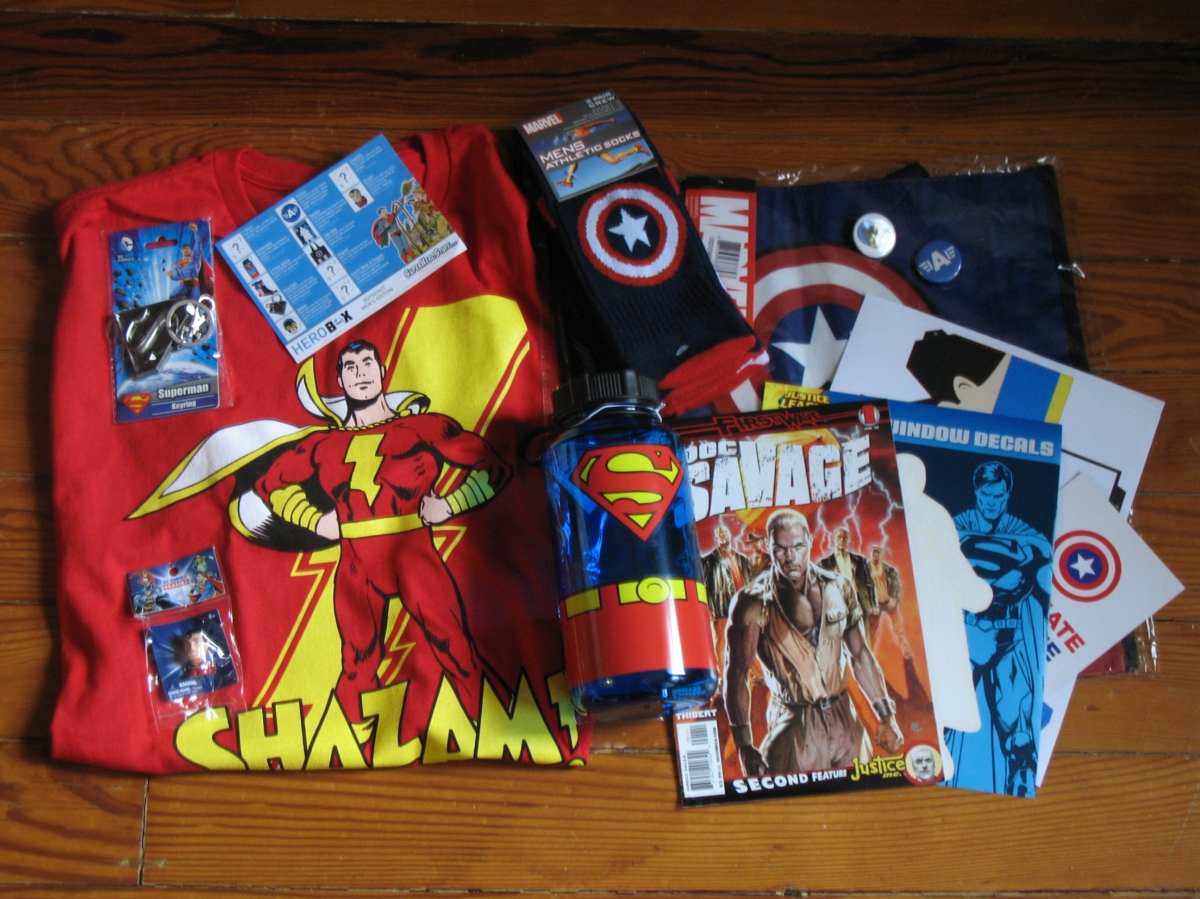 I’m always excited to review new boxes and products that that are a touch unusual so I was psyched when HeroBox offered to send me a box to review for you lovely folks.

HeroBox is a one time purchase box containing a tshirt plus other items that all feature a supehero theme. You can opt for a specific superhero (like Batman or Deadpool) or purchase a  mystery box that offers a new theme each month. You  select gender and tshirt size (S-XL).  The theme for February was “Boyscout”. Because I rarely review men’s items and I figured my boyfriend would enjoy the Tshirt, I opted for the Men’s Box and his tshirt size. 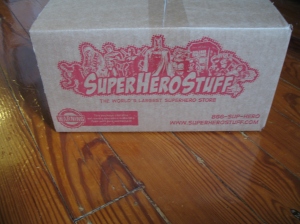 Now while I enjoy superheroes I’m more a “Buffy the Vampire Slayer” girl than a Wonder woman so I’m going to rate these items just by their value and how interesting I think they are.  I apologize in advance for some blurry pictures. My regular camera was malfunctioning so I had to pull out an old one.

Now upward and onwards or some other superhero jargon to tell us to see what’s inside this box. 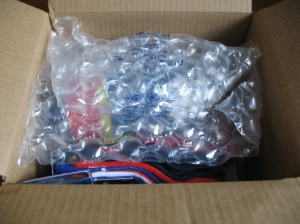 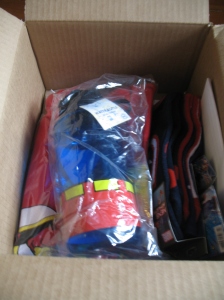 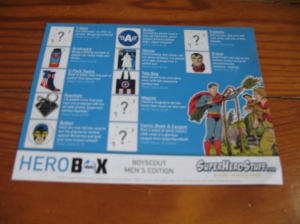 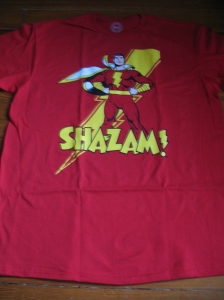 Shazam Captain Marvel Tshirt
(Estimated Retail: $19.99)
Description: “Made from 100% Cotton, this red t-shirt features an image of the Big Red Cheese himself, Shazam, arms akimbo and confidence high, posing right in front of the icon of his power. Shazam is the world’s mightiest mortal.  He might even be able to take Superman.  Maybe.  If Superman had a cold, or something.  This Shazam t-shirt is absolutely for you, fan of the freakin’ Captain Marvel family!!!.”
Verdict: Hit!
Okay, so I’ll admit that I had to go to Wikipedia to learn who the hell Shazam was (Apparently he is an ancient wizard who gives Billy Batson the power to transform into the superhero Captain Marvel.) This isn’t the most manly t-shirt I’ve seen but I think it fits the theme and I dig the cheerful red. I also imagine it’s not a shirt every guy would have so probably a good option for this box. 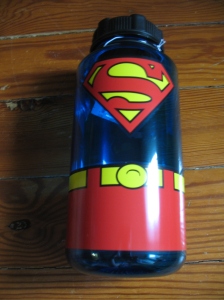 Superman Water Bottle
(Estimated Retail: $12.99)
Description: Because even the man of steel needs to hydrate.
Verdict: On the Fence
I couldn’t find this particular bottle on the superherostuff.com website. Superman definitely fits the theme but I feel like the functionality of this design of water bottle just isn’t that great (like it’s bulky and would be hard to use for something like working out).  I wish the drinkware included was more like this Superman stein. 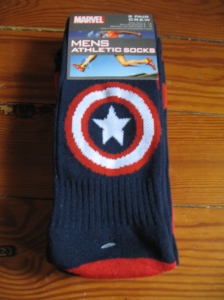 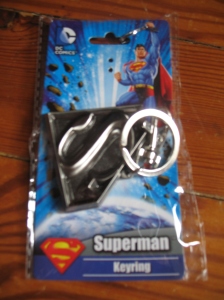 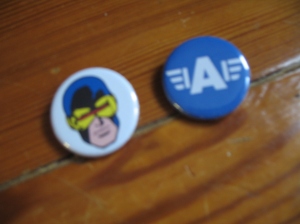 “A is for Apple, Airplanes, Alligators, and AMERICA! Those are some pretty sweet things now that I think about it. That’s what Captain America fights for….Alligators flying airplanes eating apples. See? That’s nice and condense and makes absolutely perfect sense. Suppose you missed that issue, didn’t you? That’s okay. The important thing is that you understand the message being brought to you by this 1.25 inch diameter Captain America Symbol Button. I wouldn’t suggest implanting it on your forehead, though.”
Verdict: Like
I expected some type of button in here and again both superheroes meet the theme (plus I dig Xmen). 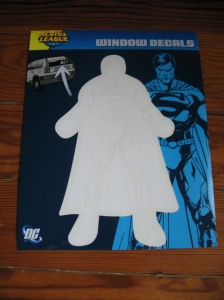 Superman New 52 Car Decal
(Estimated Retail: $5.99 each)
Description: “Superman…doesn’t handle so easy! Well, installing the 5 inch wide by 8.5 inch high Superman New 52 Car Decal is pretty easy but I was, um, referring to the quote from the newly rebooted Justice League in DC Comics’ New 52! Superman has gone through some radical personality shifts, but that’s okay. He’s still good ol Supes to us! The Superman New 52 Car Decal shows off the Man of Steel with arms open and looking for a fight. I would suspect that this stance will keep people from getting too close to your car!”
Verdict: Like
I’d much rather see Superman on a car then crap about someone’s honor roll kid, so thanks superhero box for fighting the good fight. 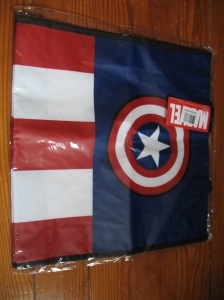 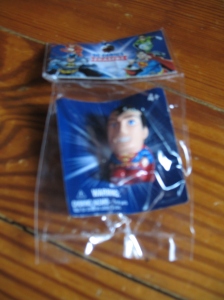 Superman Eraser
(Estimated Retail: $2.25)
Description: “When you want to erase things with Superman’s face.”
Verdict: Okay
I couldn’t find the Superman eraser on the superhero site so I linked to some other erasers. This is sort of a little filler item although I wish they’d just included something like a pen or pencil instead. 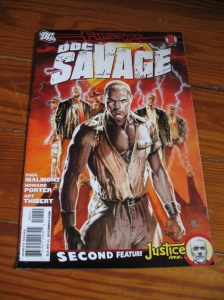 Doc Savage Comic Book
(Estimated Retail: $???)
Description: When you’ve read enough about Superman and Captain America
Verdict: Like
I couldn’t find a price on this and the card that came with box left this as a mystery with “prices will vary”. It makes sense that every box should have a comic book and it’s nice to see something that isn’t Captain America or Superman. 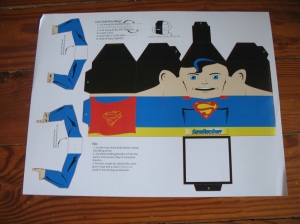 Superman Foldable
(Estimated Retail: $1.00)
Description: When origami paper cranes just aren’t manly enough
Verdict: Miss
This seems like it should just be a freebie and not included for a specific value. I couldn’t find this on the site and I’m not quite sure it adds anything to the box. 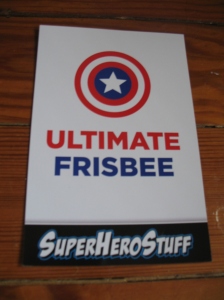 Ultimate Frisbee Magnet
(Estimated Retail: $1.99)
Description: So your fridge can be heroic
Verdict: Miss
I feel like the box just had a bit too much of the Captain America logo. I don’t mind another Captain America item, but I wish the magnet had a pic of the superhero or something a little different. 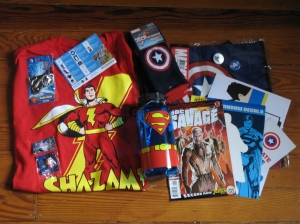 This is a tough one for me to judge because these items aren’t things I would buy for myself so instead I’m judging on whether the box delivers on its promises. I do think the “boyscout” superhero theme ran through it and, it scored well in that regard. The items were varied, but I do wish there had been something a little more unique, like superhero stationary or superhero ice cube molds or something just a little more useful (but still fun). I also like that these boxes are a one time purchase so you can treat yourself (or a superhero loving friend) without committing to a stockpile of Marvel paraphernalia. My biggest problem with this box is that cost on this seems  high  for the items received. Excluding the comic book, the “retail value” came out to $75.69 and the cost of this box is $49 plus shipping. While on the surface that sounds great, many of the items are overvalued or valued when they really should be freebies (like the foldable superman). The bigger items are all available on the superhero site which also offers sale codes, so you could probably snag those at a discount as well.

If you really love Marvel and superheroes and want a fun surprise, the box isn’t a bad option, but you may be better off just picking your favorite items from the site and building your own “best of” box.

A superhero box is an fun concept and if I was creating my own it would be all Buffy the Vampire Slayer and my tshirt would feature Spike saying “I may be love’s bitch, but I’m man enough to admit it.”

So if you could build your own superhero box, who would you include and why?

THE BACKSTORY
Get a true superhero thrill-ride without ever leaving your desk! Order a HeroBox and the best part: it’s a mystery! You won’t know what’s inside until it gets to your front door! Every box is jam packed with $70+ of SuperHeroStuff plus a few exclusive bonus items you won’t find anywhere else! There are 10 themes to choose from including 9 of your favorite heroes PLUS a themed box that changes every month!
Cost: $49.00 plus shipping