Music is my first love that I’m always homesick for, so when The Music Box offered to send me a box to review for you guys, I was super excited. They are a music subscription that delivers CDs to you monthly based on your top 3 musical preferences.

First you choose your subscription type: $5 Envelope, $10 Box, or $13 Bundle, then your favorite genres.

I loved the cute little box and logo.
Inside were some extra cards, stickers and a free download. 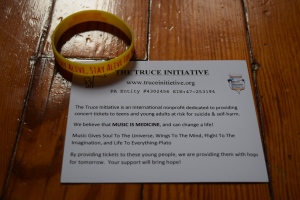 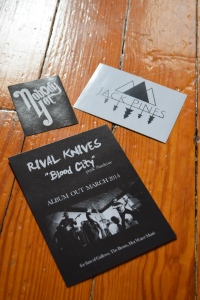 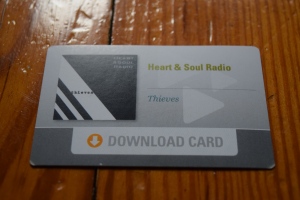 Old Fashioned Love – Artist: Dan Wolff
Verdict: On the Fence
I really liked the lyrics and melodies of the songs and Dan Wolff’s voice is adequate (if not inspired), but for me the tracks are over-produced. During undergrad, my work study gig was being a recording engineer in the school of music, so I may be a bit over sensitive to these types of things. There’s just more fiddling and reverb than Dan Wolff and these songs need. 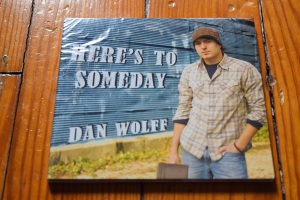 Here’s to Someday – Artist: Dan Wolff
Verdict: Miss
This album suffered from the same issue as “Old Fashioned Love” and I didn’t find most of the songs as compelling as the ones on that album (although I do like the title track “Here’s to Someday”).

One of Those Days (Acoustic) – Artist: Dan Wolff
Verdict: Hit!
This acoustic album takes the best tracks from the previous albums and really elevates them. These songs should always be played this way. After hearing this album it really cinched my feeling that the production on the previous ones did a disservice to Dan Wolff’s music. His voice sounds better here, the music feels more authentic and it’s overall a much better album than the other two. My favorite tracks were “Staying In Bed” and “Gypsy Folke Shoppe”.

I don’t normally buy CDs because of my tiny apartment and lack of storage, but there is something charmingly retro about getting some new music on a shiny disc. I hadn’t heard Dan Wolff’s music before so it was a lot of fun to hear a new artist. I really enjoyed his acoustic album, but am slightly bummed that all my CDs featured him and there were numerous overlapping tracks. I would have enjoyed the box much more if it just had his acoustic album and CDs from other artists.

I didn’t pay for this one, but if I had it would have cost me $10.00. I think that’s an amazing price to get a couple CDs sent right to your door.  Just enjoying the one CD, still made the box an excellent value.   This is a great bargain for a subscription and it would make a fun gift for the music lover in your life. I could particularly see it going over well as a gift to a college student.

Do you still listen to CDs or are you strictly digital with your tunes?

THE BACKSTORY
The Music Box delivers CDs to you monthly based on favorite genres of music.
Box Choices:
The Box:
Includes: 2-4 CD’s & other goodies. The goodies you may see in your box are stickers, wristbands, downloads, autographs, or t-shirts, etc.
Cost: $10/month
Shipping: United States: FREE
Canada: $6
International: $10