It has been an exhausting year, but no worries, I’ve been keeping up with my reading for my 2017 Popsugar Reading Challenge.  If you want to follow along, there’s even a handy dandy downloadable list for the book categories.  Head over here to check out my first five book reviews.

If you have some great book suggestions or want to see what’s coming up, head over to my Goodreads page and my 2017 List.

And if you’re working through the challenge and want to fill categories like a “A book that is a story within a story” or “A book that’s published in 2017”, consider picking up my book, “The Ice Maiden’s Tale”. 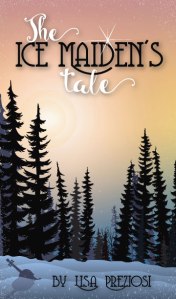 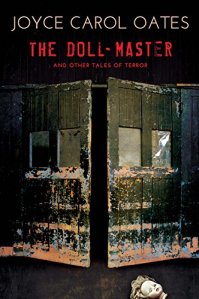 Popsugar Slot: “A book recommended by a Librarian”
The Doll-Master and Other Tales of Terror
by Joyce Carol Oates
When I went into the library, I noticed a display with suggestions from the Librarians.  Included with the books was “The Doll-Mater and Other Tales of Terror” by Joyce Carol Oates.  As is often the case with short stories, I found the different stories to be uneven.  The Doll-Master was by far the best story in the book and was particularly compelling.  The narrator draws you in and makes you empathize with him, then slowly unravels.  The progression leaves you unsettled and the story stays with you long after you’ve finished it.  I only wish all the other “tales of terror” were at the same level. The Gun Accident felt particularly uninspired. Overall, Oates is a skillful writer and this collection is definitely worth a read, even if not every story is up to par.
QUOTES:
“All your life, you yearn to return to what has been.  You yearn to return to those you have lost.  You will do terrible things to return, which no one else can understand.”
WRITER’S LESSON:
A very simple story can be given so much depth by giving the narrator a unique perspective.
BOOK SUGGESTION:
You’ll have to ask a Librarian! 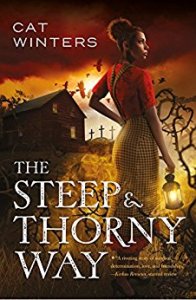 Popsugar Slot: “A book where the main character is a different ethnicity than you”
The Steep and Thorny Way
by Cat Winters
I was so intrigued by this book that was a retelling of Hamlet, but set in 1920s Oregon.  Our protagonist, Hanalee Denney is the daughter of a white woman and an African-American man.  You follow her story as she deals with the KKK, the mysterious death of her father, and her friendship with the boy convicted of killing her father.  I found “The Steep and Thorny Way” to be well-written and particularly relevant as the US currently deals with the rise of the white supremacist movement.  Hanalee’s struggles were touching and the setting was rich and mysterious.  The novel did a beautiful job of addressing the difficulties in being a homosexual during that time period.  Definitely give this book a chance.
QUOTES:
“I believe that ‘love’ and ‘wrong’ are two deeply unrelated words that should never be thrown into the same sentence together. Like ‘dessert’ and ‘broccoli.’”
WRITER’S LESSON:
A character’s ethnicity is always part of the story – in one way or another.
BOOK SUGGESTION:
For a good book, by a character that is not my ethnicity, try Caramelo by Sandra Cisneros. 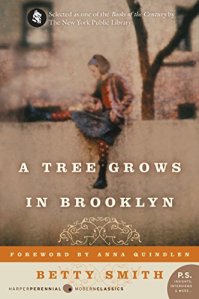 Popsugar Slot: “A book that’s been on your TBR list for way too long”
A Tree Grows in Brooklyn
by Betty Smith
This is one of those books I know I should have read a long time ago and never got around to.  It took me a while to get through, but it’s another one that seems a perfect fit for our current climate in the US.  This story takes us to the turn of the century, where we follow Francie as she grows up with her poor family in Brooklyn.  It was amazing to me that a whole century later, so many working people are still struggling just as much as the characters in this book. With all of our money and technological advancement, there are still people working multiple jobs and struggling to put food on the table.  This book should be required reading for all of our government representatives.
QUOTES:
“A lie was something you told because you were mean or a coward.  A story was something you made up out of something that might have happened. Only you didn’t tell it like it was, you told it like you thought it should have been.”
WRITER’S LESSON:
Some stories are less about what happens and more about taking us to a different time and place and learning what it means to live there.
BOOK SUGGESTION:
You’ll have to figure this one out for yourself. 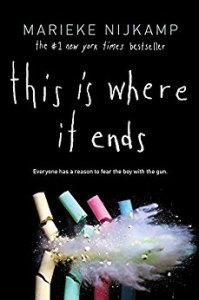 Popsugar Slot: “A book by an author from a country you’ve never visited”
This Is Where It Ends
by Marieke Nijkamp
The author of “This is Where it Ends” is from The Netherlands, where I have sadly never visited.  This story takes us straight into YA territory, where we experience a school shooting along with teenagers at Opportunity High School in Alabama.  Moving from to student to student, the book gives life to different voices as the events unfold. Not only is there the anxiousness of what will happen to these teens, but the underlying mystery of why this shooter is driven to murder.  The topic of a school shooting could have easily become cliché and maudlin, but it’s handled deftly and with respect.  This was a page turner, and a must read if you enjoy the YA genre.
QUOTES:
“Dad always told me there are more stories in the universe than stars in the sky. And in every story, there’s the light of hope.”
WRITER’S LESSON:
When you are utilizing multiple perspectives of the same events, you really need each voice to be unique and each one to give a different insight into what’s happening.
BOOK SUGGESTION:
I’ve also never been to the UK, so I’ll recommend “Neverwhere” by Neil Gaiman. 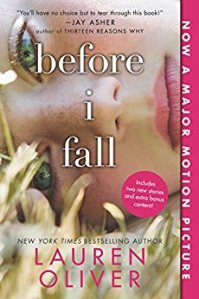 Popsugar Slot: “A book that’s becoming a movie in 2017”
Before I Fall
by Lauren Oliver
Okay so “Before I Fall” is like Groundhog’s Day, but without humor, fun and cleverness.  The main character, Samantha, is supposed to start off unlikable and then grow and change from her mean girl persona, as she learns a lesson by living the worst day of her life over and over again. Unfortunately, she never becomes a character I really like, identify with or even care all that much what happens to. There are some lovely sections of prose, but they often feel overdramatic. It all culminated in an ending that to me, didn’t quite fit the story.  It felt like the author wanted to go for something unexpected and forced a conclusion that wasn’t earned.   For me, it just didn’t work.  This story was a good concept that was poorly executed.
QUOTES:
“That’s when I realized that certain moments go on forever. Even after they’re over they still go on, even after you’re dead and buried, those moments are lasting still, backward and forward, on into infinity. They are everything and everywhere all at once.”
WRITER’S LESSON:
You can’t force an ending just because you want to be clever or edgy.  It has to fit the story.
BOOK SUGGESTION:
It looks like an amazing movie and the source material is wonderful, so go with the classic “Murder on the Orient Express” by Agatha Christie. 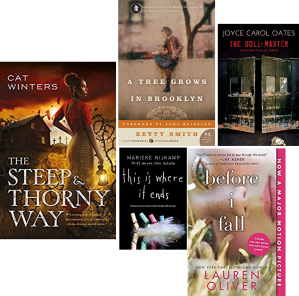 Thanks to the library and my long commute, I’m making excellent progress on my list and I’m determined to hit every category this year—including the “Advanced” ones.

What’s currently on your bookshelf?